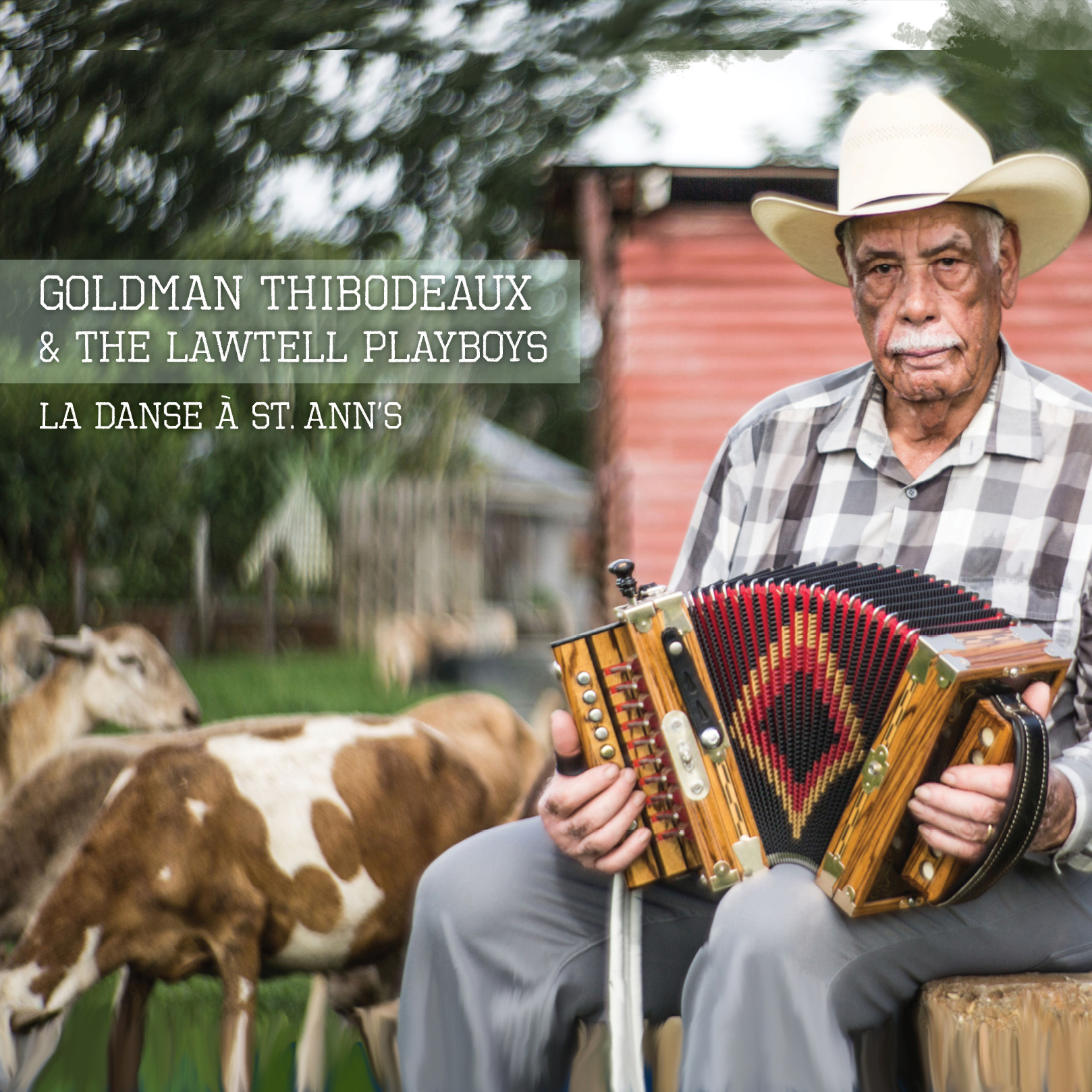 Today, we would have met in Opelousas early in the morning after Goldman tended to his sheep, and made the drive to New Orleans to play Jazz Fest on the Fais do-do stage at 11 a.m. There, we would have announced the release of the first album we’ve recorded in 20 years. Part of that plan has obviously been thwarted. But not all of it!

We have an important announcement to make! On Friday, May 29, 2020, our new album "La Danse à St. Ann’s" will be available on cd and digital download on Nouveau Electric Records. The album is available for pre-order now and includes a free track off the album "Je T’aime Autant" to hold you over until the release date.

Nouveau Electric Records is excited to be releasing La Danse à St. Ann’s by Goldman Thibodeaux and the Lawtell Playboys. The 15 tracks on this album capture Goldman performing both traditional Creole repertoire, as well as his own improvisations, and comprise his first new album release in 13 years. La Danse à St. Ann’s will be released on CD, digital download and available for streaming on all major platforms on May 29.

Goldman, aged 87, is a living legend and one of the last musicians performing in the traditional French Creole "La La" style. La Danse à St. Ann’s was recorded by Mark Bingham (Marianne Faithfull, John Scofield, Dr. John, etc.) at the Thibodeaux Family Reunion, November 2019 in Mallett, Louisiana. The Playboys’ line-up at this performance was: Goldman Thibodeaux - accordion and vocals; Brock Thibodeaux – frottoir; Louis Michot - fiddle and vocals; Courtney Jeffries - acoustic guitar; Justin Leger - electric bass; Barry Cormier - drums and vocals. Produced by Bingham and the band’s fiddle player Louis Michot (co-founder of Lost Bayou Ramblers), the album is snapshot of the band at its most comfortable, in its natural element, surrounded by hundreds of family members in a church hall.

Thibodeaux first began playing with his brother-in-law’s band at age 14, and in 1966 he began sitting in with the Lawtell Playboys along with Delton Broussard and Calvin Carriere. The band was originally started in 1946 when brothers Bébé and Eraste Carriere combined their talents to form The Lawtell Playboys. Bébé, known as the “King of the Zydeco Fiddle”, made his first fiddle from a cigar box and a broken window screen, and played alongside his brother Eraste, on accordion, for many years. Over time, Eraste passed the accordion position on to Delton Broussard, and Bébé passed the position of fiddle player to Eraste's son, Calvin Carriere. Goldman learned to play accordion in his 50's, following a heart attack. Calvin (Goldman's cousin) and Delton played with him often to help him learn. When Delton became ill, he passed the accordion position to Goldman. Calvin and Goldman played for several years before recording their first cd in 2001 titled 'Les Miseres dans le Coeur'. Just before Calvin died, he asked Goldman to take over the band and continue using the name “Lawtell Playboys”.

One of the last living musicians to practice traditional Creole music -- often referred to as “La La” music -- much of Goldman’s inspiration comes from seeing Amédé Ardoin play at a house dance in the Lawtell area. Perched up in a tree as the now-legendary Grandfather of Zydeco arrived on horseback from another dance 20 miles away, Goldman was thrilled when Ardoin offered to let the young boy carry his accordion to the house for him. Goldman watched every second of Amédé’s performance intently, an experience that inspires him to this day. Thibodeaux is likely the last living person to have seen the great Amédé Ardoin play a house dance.

As a champion of Creole culture, Goldman has been inducted by the Acadian Museum into the Order of Living Legends and received a Folklife Heritage Award from Louisiana Lt. Governor Jay Dardenne. In 2015, he was featured at the Louisiana Endowment for the Humanities Bright Lights Literacy Awards. He has performed at the New Orleans Jazz and Heritage Festival for the last 20 years straight, and was asked to return in 2020; his plan was to release La Danse à St. Ann’s in conjunction with that appearance. When the festival was canceled due to the COVID-19 pandemic, Thibodeaux chose to release the album anyway to offer his fans and music lovers internationally something to keep their spirits up in these trying times.