On this first self-titled release, Corey Ledet Zydeco pays homage to Ledet’s family and musical heritage which are inextricably combined. His great-grandfather, Gabriel Ledet, played professionally with the colorful early Jazz legend Bunk Johnson as an upright bassist. Grandfather, Buchanan played drums with Clifton Chenier and Rockin’ Dopsie, as Zydeco’s first drummer and invented the twice-pumped bass drumming pattern called “double clutching” that’s been an integral part of the genre ever since. Numerous members of this extended French speaking Creole family followed in their footsteps, playing professionally and non-professionally in the decades that followed. Corey’s rise to Zydeco royalty in the 21st century was a fait accompli. 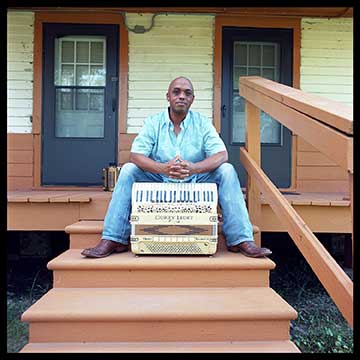 Corey Ledet was born and raised in Houston, Texas, and spent his Summers with relatives in small-town Parks, where he was exposed to their Kouri-Veni language and Creole traditions. This molded and shaped Corey’s world in a profound way. This culture has its roots in Louisiana, but eventually spread across the country, including into neighboring Texas. When he returned home after summer, Corey was able to remain immersed in the Creole culture he learned to love.